I can be wrong

I don't remember how "The Healthy Habit Revolution: Create Better Habits in 5 Minutes A Day" by Derek Doepker ended up in my Kindle library, but I know my first impression was that this was another self-help/me-too kind of book.  I went to Audible to check a sample of the audio and found out it was read by the author.  The author is a fitness and life coach.  I could just hear the "bro"ness in his California accent. I was convinced this would be a bad read and that I would be able to poke holes in his methods and techniques.  I even thought I could make a game out of counting the "Dude" and "Bro" quotes in the book

Maybe I should not even take the time to read this book and move on to something more intellectually stimulating like "Superintelligence: Paths, Dangers, Strategies"  by Nick Bostrom.  That surely would make me smarter.

But I decided I was at the pool and my Kindle said the book would take me less than 3 hours to read. Why not risk it.  I am glad I did.

I was pleasantly surprised very quickly at Mr. Doepker's referencing of other books like "The Power of Habit" on how to make - and break - habits.

Many habit books I have read have been full of theory, biochemistry, and studies.  This book references several of those.  But this book is not about that.  It is about getting you moving.

The core of the book is a 21-day plan to get your first "micro-habits" going.  The book is intended to be read over 22 or 23 days (not the 3 hours I took). One chapter per day so that you can reflect on your journey to that point and educate your path going forward.

Though not directly named by the author this book has three major sections.

Background and Introduction to Micro-Habits

After a quick yet concise history of how Mr. Doepker used the methods described in this book to improve his life and the life of his clients, he goes into a breakdown of the basics of creating a few small habits, micro-habits, that the reader would use during the 21-day exercise of this book.
As someone that has built many good habits in my life, I found myself nodding in agreement with Mr. Doepker's definitions and methods. If you follow them, you will select good initial micro-habits to start with.

The daily chapters are short.  Something you could read in less than 10 minutes per night.  So they would not be much of a burden on even the most hectic schedule. Chapters seem to include another small bit of advice that would be well timed for that portion of the habit building journey.

Each daily chapter builds off the one before it. Though direct in the advice given, there is a building set of sub-lessons, what the author calls "hidden lessons," that are pointed out in the final section of the book.

In the final segment of the book, Mr. Doepker directly covers the "hidden lessons" in the daily chapters. But more importantly, he gives good advice on how to take this start and build on it. There is a good preview of the mistakes one can make in the building process, like being too inflexible.

Finally, there is an excellent reference section so that ones newly formed habits can be taken even further by reading the biochemistry, philosophy, and lessons from others.

If you had to start with one book on habits to be able to find many other good books, I would have to recommend this one.  It has references to no less that 12 other books and authors in the habit building space. (There are actually 17 books and 9 recommended articles).  I can even forgive him that three of the books he recommends are his own books.

What is the Selection List and why would it ever be used? As a Brain database grows, there will be times when you will need to mass edit ... 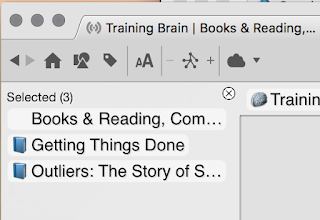